During the second half of the 19th century, a large colony of artists left Paris and settled in Ecouen, then a large rural town of a thousand inhabitants, to share or perfect the practice of their art.
They were attracted by the geographical location, the presence of the castle and the many surrounding forests, sources of inspiration.
During this period, Ecouen welcomed more than a hundred artists, many of whom were foreigners, mainly Americans.
Pierre Edouard Frère was the driving force behind this school.
Some prestigious painters such as Charles François Daubigny (1817-1878) and Jean Baptiste Corot (1796-1875) frequented Ecouen before moving on to Auvers sur Oise.
At that time, professional and friendly relations were created between the two villages.
After 40 years of teaching and animation, the death of Pierre Edouard Frère in 1886 marked the beginning of the decline of the school.
The school of Ecouen is today well known to experts but forgotten by the general public.
Its riches were brought to light in 1997 following a major research, expertise and restoration project initiated by the municipality.
We invite you to visit the art gallery located at the Ecouen town hall.

1-The School of Ecouen :
The originality of genre painting was to show scenes of the daily life of small people and humble peasants. As this type of painting became fashionable, particularly in the United States, many Anglo-Saxon painters came to Ecouen to be taught by Pierre Edouard Frère, forming the Ecouen School.

2-The Ecouen Painters’ Colony:
The term « colony » applies to painters with a focus other than genre painting. However, they were intimately involved with and influenced by the artists of the Ecouen School. 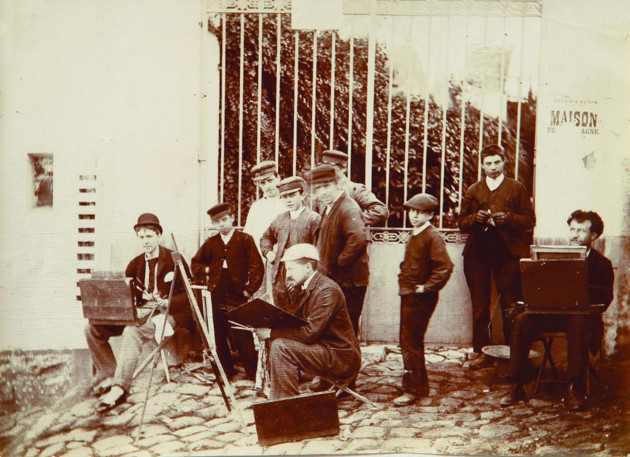