Thomas Allen was born in St. Louis, Missouri. His ancestors were among the founders of Windsor, Connecticut, in the wake of the Mayflower. The son of a railroad tycoon Congressman, he studied art in his hometown of St. Louis at Washington University and then traveled widely. It was a school trip to the Rocky Mountains with J.W. Pattison in 1869 that decided him to become an artist. He became an animal painter as well as a landscape artist and caricaturist.
In 1871, Thomas Allen came to Paris but found the weather was not conducive to his art because of the destruction caused by the war of 1870. He then visited Düsseldorf and in 1872 entered the local Royal Academy. He stayed there for four years. In 1877, his teachers declared him fit to open his own studio. He used his vacations to visit other cities and countries, such as Holland, Belgium, England and France.
In 1878, he resided in Ecouen at 36 rue de Paris with his wife, Eleanor Godard Whitney (married June 30, 1880, died in Ecouen on May 14, 1882 after giving birth to Eleanor Whitney Allen on April 18, 1882). He was part of the colony of painters of Ecouen with Luigi Chialiva, Pierre Edouard Frère, Auguste Schenck and others. He remarried to Alice Ranine (1862-1949) on October 23, 1884 with whom he had a son, Robert Fletcher Allen (1892-1903) and a daughter, Dorothy Fletcher Allen Preston (1898-1987).
He traveled to the American West and to Texas where he painted a work entitled « Evening at the Market in San Antonio » which received a medal at the Paris Salon of 1882. That same year he settled permanently in Boston, where he had a long and distinguished career.
He chaired the faculty of the Boston Museum School of Drawing and Painting and was also president of the Boston Museum of Fine Arts.
His paintings are on display at the Berkshire Museum, the Joslyn Museum of Art, the Boston Museum of Fine Arts, the San Antonia Museum of Art, the Metropolitan Museum of Art, and the Saint Louis Art Museum. 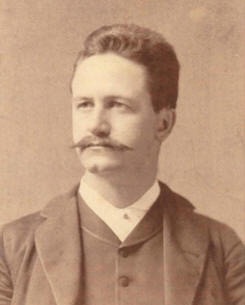 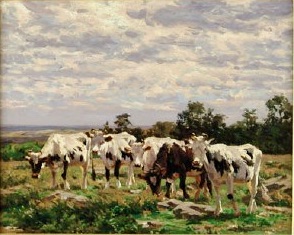 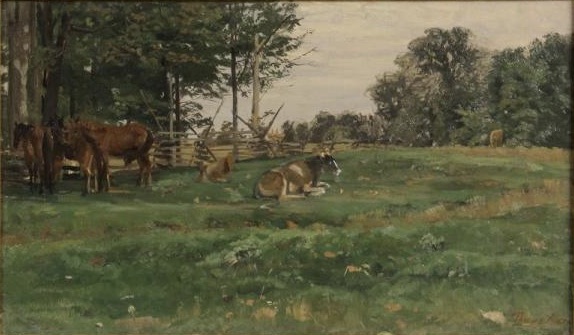