Auguste Frederic Albert Schenck is born in Glückstadt, a danish city annexed later on by Prussia and part of its Schleswig-Holstein province. He is the son of Jakob Schenck and Christine Granso.
In Warsaw, on August 23rd 1850, he marries Louise Emilie Stapaczjuska.
Auguste Schenck starts his working life as salesman. He tried to make a fortune in the UK, then in Portugal where he stayed five years in Porto, selling wine. Bankrupted, he sales his wine cellars and moves to France: in Paris first, then Villiers-le-Bel in 1861, finally Ecouen in 1862.
As a hobby first, Auguste Schenck likes painting art and learns from his master, Léon Cogniet (1794-1880), how to make realistic drawings of animals on canvas. He won a medal in 1865.
In his critics of the 1866 Salon de Paris, the famous writer Emile Zola congratulates Auguste Schenck, being surprised to see how the painted deer are like real ones.
Later, flocks of sheep became the trademark of Auguste Schenck. He was living in a large property located on the upper part of “rue de la Beauvette” (Beauvette street), being today “rue Auguste Schenck” (Auguste Schenck street). It is said and under testimony of a lot of witnesses, that he was raising animals on his property, most of them being sheep and used them as models for his paintings. Emile Zola himself, during a visit in the village of Ecouen, have seen the Auguste Schenck animals and wrote an article about them. Some journalists visited his property and one of them, Louis Enault wrote in the newspaper “La Presse” (the press): “Auguste Schenck knows better than anybody else the sheep preferred attitudes and their mobile appearances”.
Auguste Schenck went several times in Auvergne (Center of France) and the local scenery inspired him for his paintings showing a flock of sheep caught in the mountains by the blizzard.
Auguste Schenck had a lot of humor. He painted “Le tableau et les oies” (the art piece and the geese) showing a flock of goose contemplating one of his typical paintings showing a lot of sheep in the snow. He probably wanted to make fun of some journalists saying that his work was too conventional and without any inspiration.

An interesting story was reported on July 24 1868 in the newspaper “Le Petit Journal”, showing the multiple facets of the Auguste Schenck personality. At that time, a group of Gipsy arrived in the village of Ecouen. Some painters of the Colony went to discover them as potential source of new models. Between them was Thomas Couture, Paul Soyer, Pierre Edouard Frere, Theophile Emmanuel Duverger, Paul Seignac, Samuel Frost Johnson (1835-1879), Henri Dargelas, Charles Edouard Frere, Leon Herrmann, Alfred Leonard Wahlberg (1834-1906) and Auguste Schenck. The gipsy were in a very precarious situation and with them was a dying old lady. Auguste Schenck is the one coming to help them. A journalist said: “This Danish guy knew all the languages, including central Europe patois and was of a big help for them. They, then, could communicate and satisfy their needs. They were so happy that women and children were kissing his feet like an Oriental Emperor and the men obeyed him like a Chef of a tribe”. The next day, they moved to Pontoise City and Auguste Schenck went with them as an interpreter.
Auguste Schenck and his friend Pierre Edouard Frere were very courageous during the 1870 war against Prussians. He used his knowledge of the German language to ease-up with the situation in this difficult time.
In 1875, Auguste Schenck, being a great compassionate man, organized a lottery in favor of the Ecouen victims of a flooding.

Auguste Schenck received medals from several countries, like the “Légion d’Honneur” from France in 1885, “Isabel the Catholic Order” and “the Christ Order” from Portugal.
He became very famous and his work is greatly appreciated even in recent times. In 1942, Salvador Dali did a painting inspired by one of Auguste Schenck called “Perdu dans la montagne” (lost in the mountain). The flock of sheep is transform into furniture, harm-chairs and sofas. As reported on January 1st 1912 in the newspaper “Le Figaro”, a very large Auguste Schenck painting (4 meter by 3.5 meter) worth of 15.000 F has been stolen from the property where his widow lived in.

Auguste Schenck died at the age of eighty-five, in his house located 18 “rue de la Beauvette” (Beauvette street) while he was painting. Samuel Frost Johnson and Alfred Leonard Wahlberg, American painters passing by Ecouen some weeks before his death, reported in their travel note that Auguste Schenck was very sick.
His funeral took place on January 2nd 1901. The Ecouen mayor, Arthur Queriot, in his eulogy, expressed the people recognition to the great artist, the devoted man and the humanist he was.
Mrs Scheck, his widow, wanted to give an artwork to the Ecouen City.
A group of painters composed of Gros, Lorillon and Aubey has chosen “L’Echir”. The painting is exhibited in the City Council meeting room. After this, la “Rue de la Beauvette” (Beauvette street) was named “rue Auguste Schenck”. 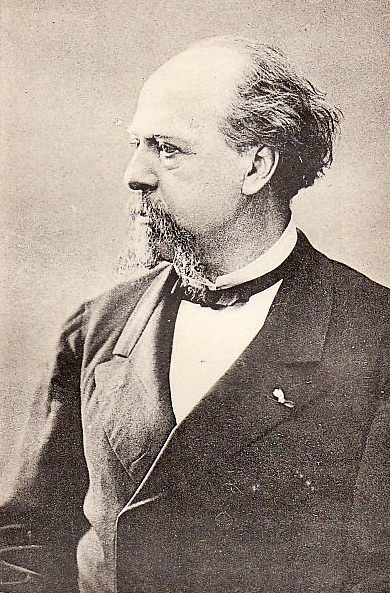 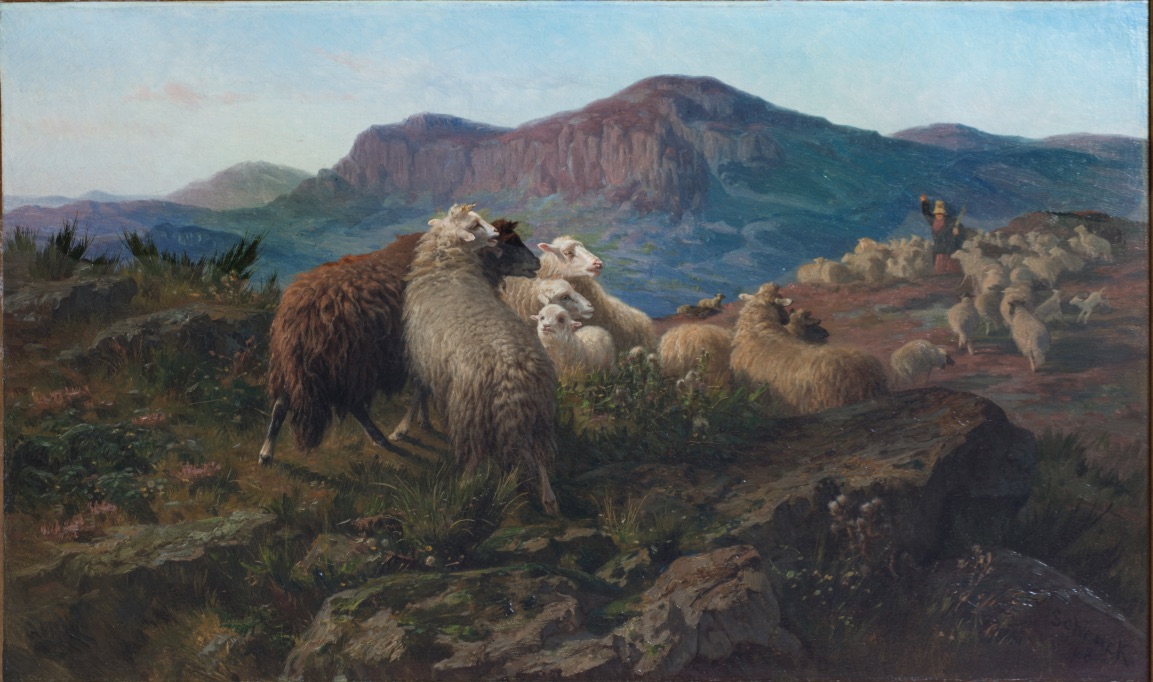 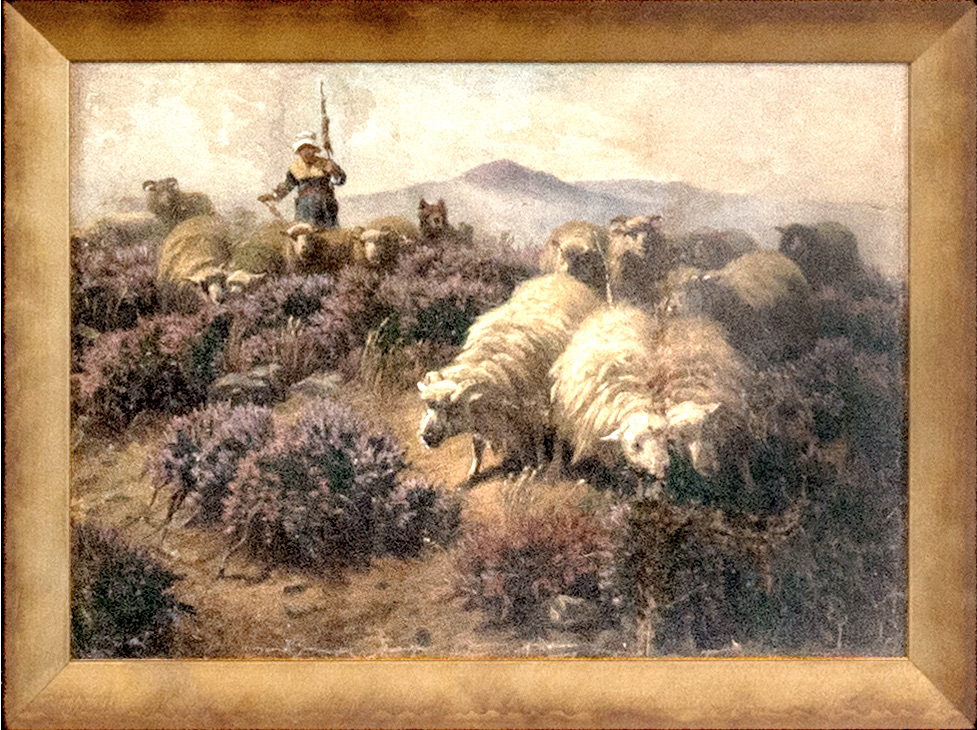 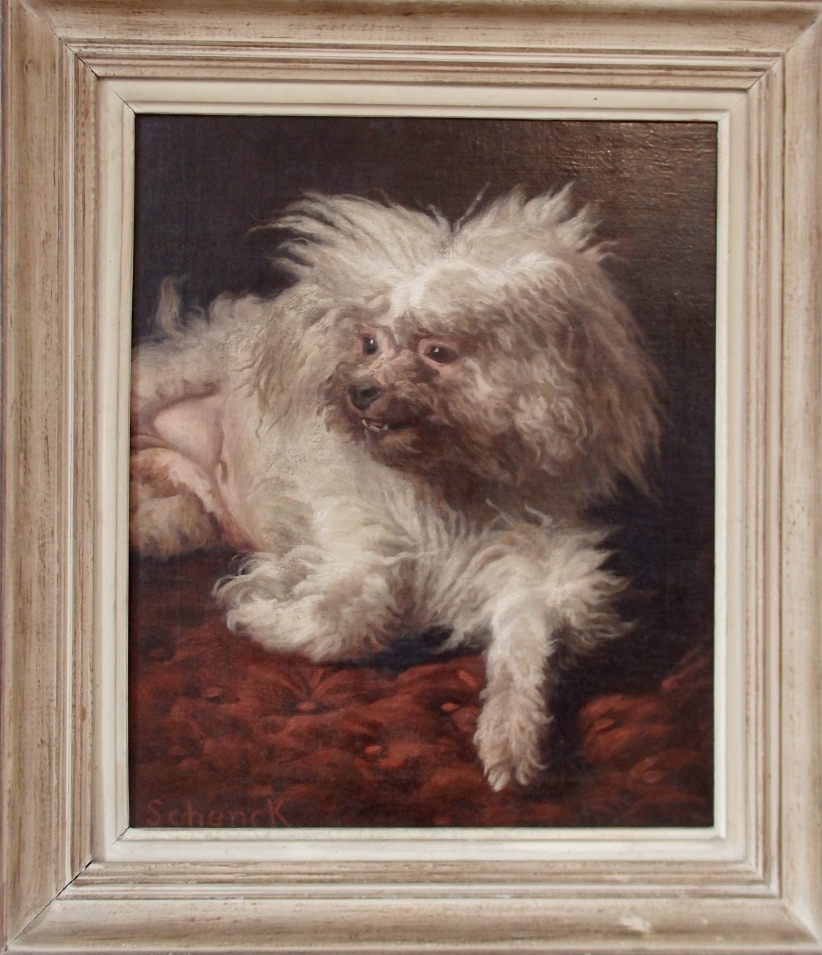 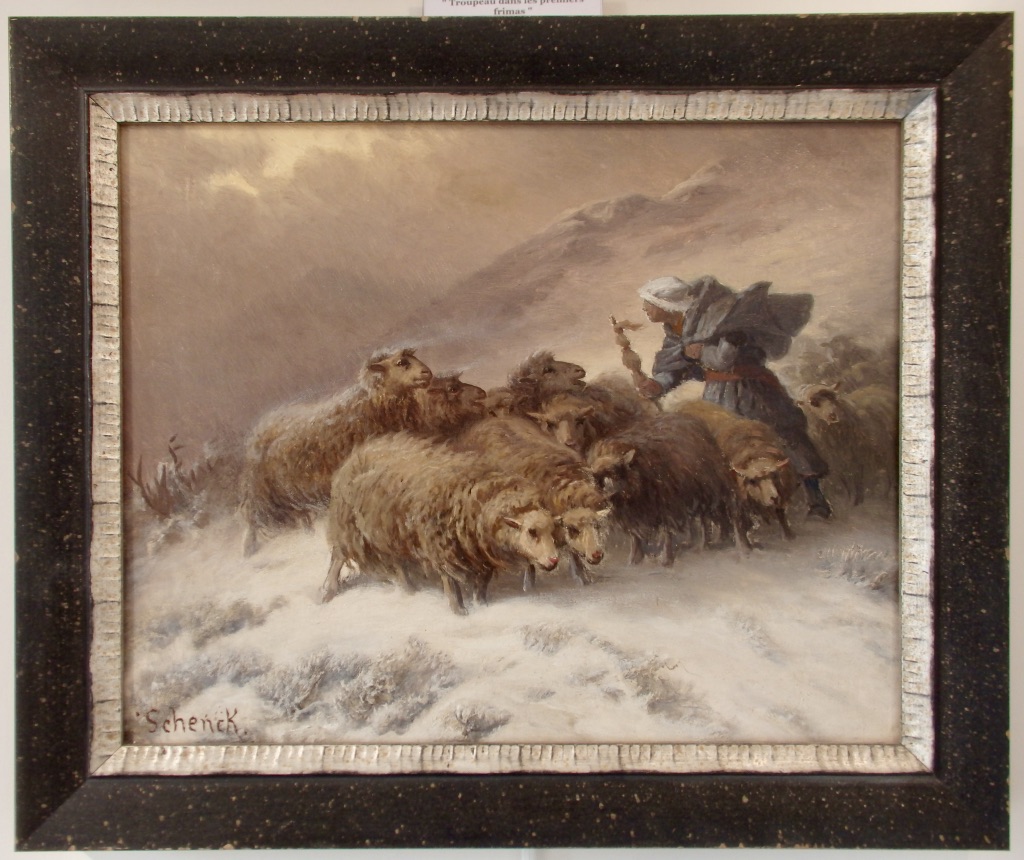