He became French and made his career in France as a decorative painter (Opera, Opéra-Comique, Comédie-Française, La Gaîté, Théâtre Lyrique, etc.). He had his studio on rue de Lauzun in Belleville. In 1859, while working for the direction of the theater in Soisson (Aisne), he executed a gouache project for a mural he intended to paint in the church of the faubourg Saint-Waast: « The Baptism of Clovis« .
On September 21, 1872, Henry Robecchi, painter, and Germaine Peviani, his wife, acquired a house in the rue de la châtaigneraie, a first floor divided into seven rooms, with a right of way on the small square in front of the house.
From January 1, 1890, Henry Robecchi granted the Butel et Valton company, for the creation of sets, a lease for a large workshop and outbuildings, 9-11, rue de Lauzun, in Paris, for nine years in return for a rent of 6,000 F per year. On July 21, 1898, a judgment of seizure is exercised against them.
Robecchi is the father-in-law of Charles Edouard Frère who married his daughter, Giulia Augustina Maria Robecchi. Henry and Giulia Robecchi are buried in the Frère family grave (father and son). 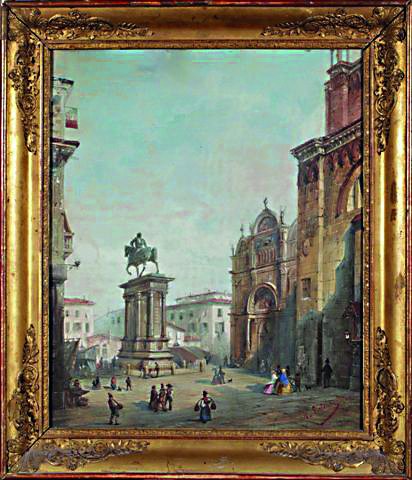