In 1861 or 1862, Léon Marie Constant DANSAERT settled in Ecouen, coming from Belgium, and became a naturalized French citizen under the name Dansart but he always signed and wrote Dansaert with an E.
He exhibited in Brussels and Paris in 1863 and was invited there until 1889. His paintings, in a realistic style, offer historical scenes and then he evolves by treating more intimist scenes. This was undoubtedly due to the influence of his master, Pierre Edouard Frère and his friends. This tendency is very much felt in his painting representing this interior of a workshop where a locksmith works, visible in the town hall of Ecouen. He also worked in Italy and Germany, where he traveled for some time. He exhibited at the Antwerp Salon (1864) and at the Paris Universal Exhibition (1867). From 1868 to 1889, he presented paintings of the familiar life of the 17th century, where he became immersed in the painting of that period. He also painted scenes of the Revolution. In 1880, he participated in the Belgian Art Exhibition in Brussels.
Although often praised, appreciated for his « softness » or his « finesse of brush acquired at the school of Mr. Edouard Frère », the critics do not spare him. « The Petit journal » praised his style « lively, animated, brilliant and with a spiritual touch for his paintings Sale at the auction and the Pigmen, in 1868″. But he was sometimes criticized for « lack of authority » in his design, so not all critics gave the same judgment on his paintings. He was named knight of the order of Saint Maurice and Lazarus in 1861 (honorary order that helps the needy and the sick). During the council meeting of March 26, 1871, he proposed to approach the Bread Committee in Brussels to obtain aid for the wounded and victims of the war.
He took over as mayor of the City of Ecouen between 1879 and 1895. With the rank of lieutenant, he led the firemen to fight against the disasters in the village, and was part of the firemen’s recruitment commission in 1878. He was awarded several medals as a rescuer. Moreover, he regularly participated in the Antiquities Commission of Seine-et-Oise County from 1883 to 1908.
On July 11 and 12, 1863, Noël Philippe Gaché and Victorine Marguerite Cloux sold to Léon Marie Constant Dansaert, a painter, and Henriette Tassain, his wife, a house located at 18 rue d’Ezanville, comprising, on the ground floor, two rooms and an attic above, a small woodshed, a garden with a small alley on one side, in exchange for 1500 F, paid cash.
Married to Henriette Joséphine Agathe Louise Tassain, three of their children were born in Ecouen and had as witnesses: Philippe François Sauvage, a painter living in Villiers-le-Bel, and Arnoux Auguste Michel, a painter living in Ecouen.

The inventory drawn up on October 30, 1876, after the death of his wife, leaves him with five living minor children to support. In his house, rue d’Ezanville, the artistic works are estimated at 1750 F, they are: a marine of Vernier, 50F; a landscape of Léonide Bourges, 100 F; a landscape of Desmarquais, 100 F; and four unfinished paintings: « Le jeu de boules« , « l’Etape« , « la Conservation« , and « Variable« , 1500 F. His name is evoked in the words of a character in Elizabeth Champney’s novel: « Do I not pose? What would become of the artists, that’s what I’d like to know, if we don’t do it? There’s Monsieur Dansaert, I’ve posed for every one of his drunken characters. I wear this old dented silk hat for that purpose. I sweep his studio, clean his brushes and all he has to do is spread his paint on the canvas. I think he owes most of his success to me and I’m glad I helped him… »
For the anecdote, we can point out that several private individuals granted him loans, in particular on December 30, 1877, 2 000 F of Marie Catherine Lacourte, of Presles and on May 12, 1891, it is 5 000 F of another lender.
Towards the end of his life, Léon Dansaert donated one of his works, « the Locksmith in his workshop« , to the City of Ecouen. The council was unanimous in its acceptance. 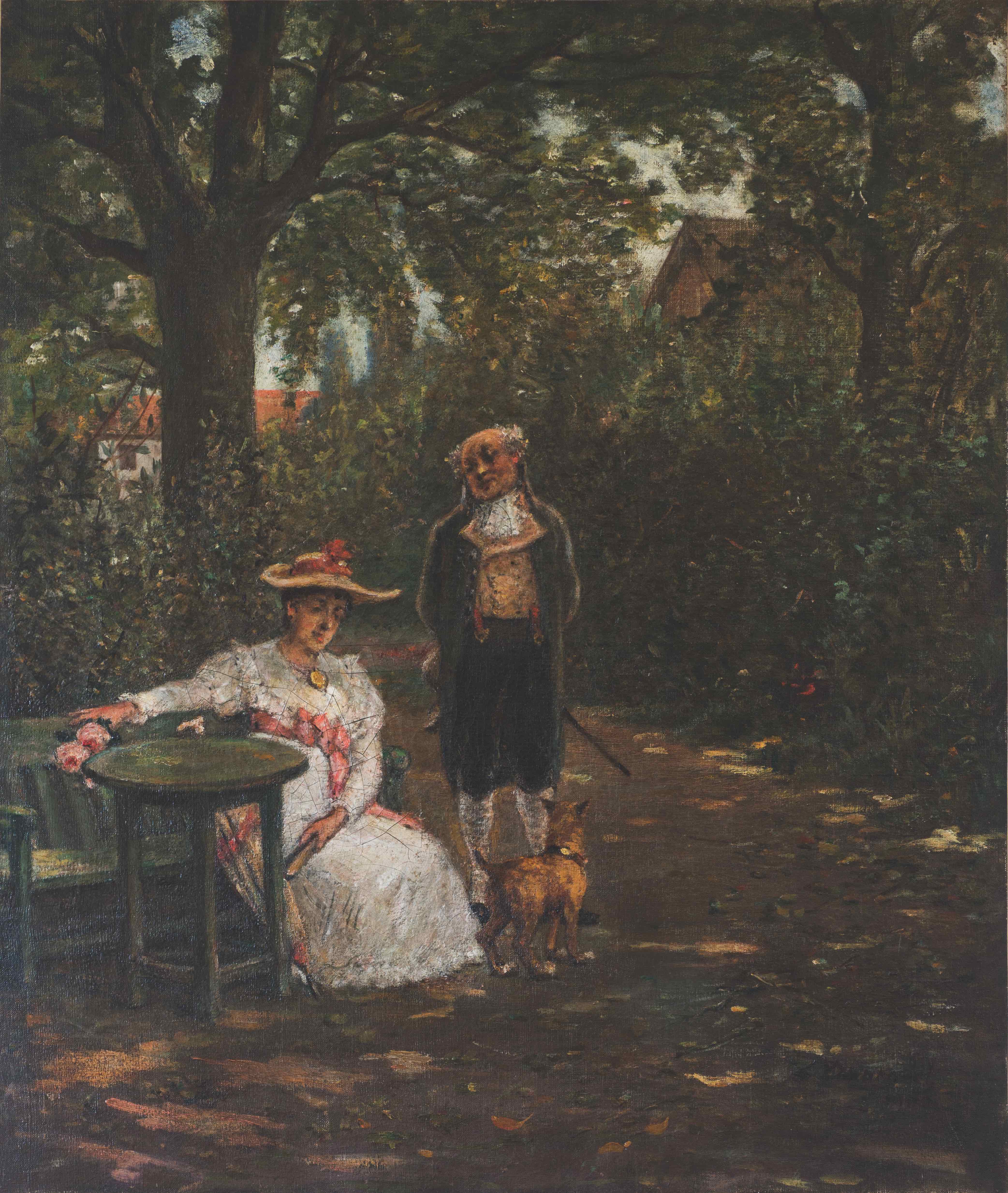 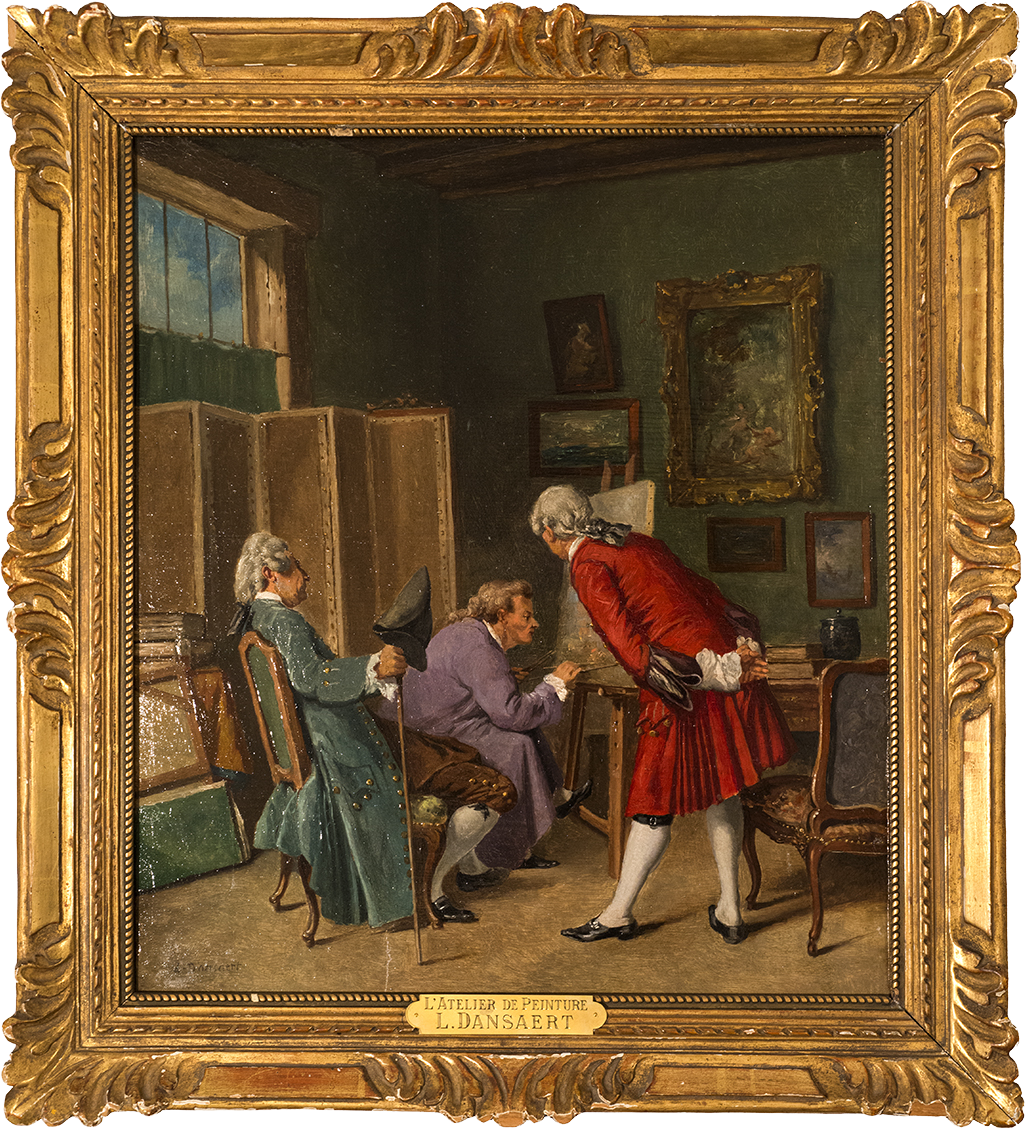