Louis Theophile Hingre is born in Ecouen, rue du Four-Gaudon. As young as 12 years old, he enters into the workshop of Louis Gervais and Adrian Possot to learn sculpture for bronze adornment parts manufacturing. He’ll stay there until he reaches twenty-five years old.
At nineteen years old, he get married with Louise Dailly. They had four children : Maximilien, Clémentine (part of her descendent lives in Ecouen today), Marguerite and Leon (painter and sculptor becoming one of his father’s student).
Louis Theophile Hingre was very much involved in politics. In 1858, for several reasons, he had to expatriate himself in England. For seven years, he worked as adornments sculptor in the Birmingham Elkington jewelry workshop. His first animal studies gave him the opportunity to make horse race trophies. Being an English resident, he exhibited at the Salon des Artistes Français (French artists salon).
Back in 1869, Louis Theophile Hingre settles down in Paris. He took part of the contest of the “Union centrale des Arts décoratifs” (Decorative Arts central Union). He won two prices, one of 1000 F and the other of 300 F.
He’ll exhibit every year, until he reaches 78 years old, at salon des artistes Français (French artists salon). He’ll exhibit there, from 1860 to 1910, a total of forty-five artworks.
Louis Theophile Hingre is appreciated as sculptor of animals but he is also a talented painter and illustrator like most of the artists of the School of Ecouen. His admiration for Alfons Mucha (1860-1939) is visible in a lot of “Art Nouveau” style illustrations he did for prestigious brand names documents.
Even if Louis Theophile Hingre was not a permanent resident of Ecouen, he was part of the Painters Colony trend of that time.
He died at Seventy-nine years old in the Ecouen house of his daughter Clementine and is buried in the Ecouen cemetery.
In 1997, in his honor, a street of Ecouen was named “rue Louis Theophile Hingre”. 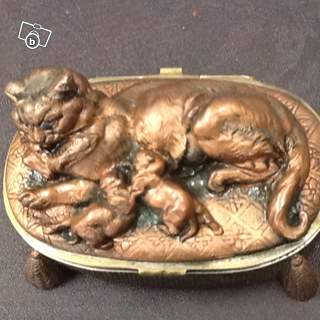 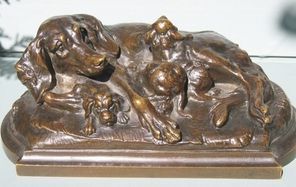 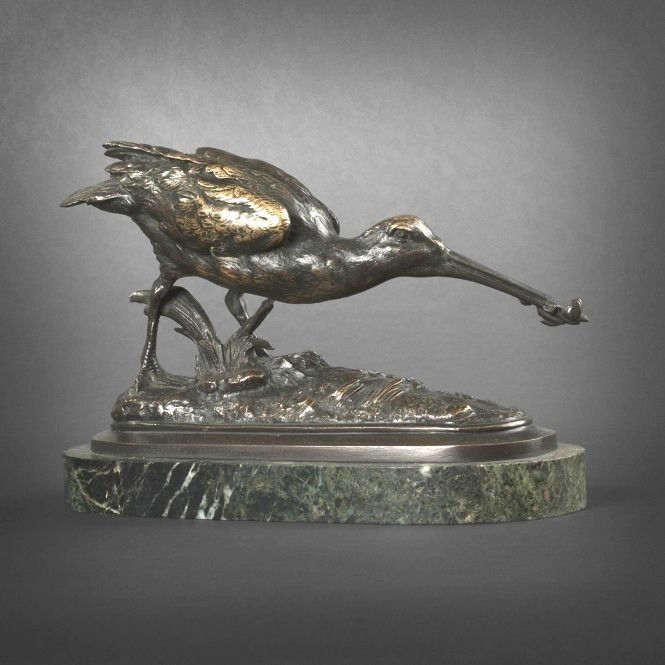