Blemond, painting in the 20th century, remains somewhat of a mystery. We don’t know his exact first name (except that it starts with an A), his birth date, date of death, or where he resided, but we do know with certainty that his keen eye and work is a testament to the country lifestyle at Ecouen during his time.

The five paintings that are attributed to Blemond depict landscapes and locations that are easily recognized today, approximately 100 years later. Exhibiting a range of ochre and blue colors, “Place de la Mairie” (City Hall Place), with the surrounding pavement, remains the same, except for the turret removed in the year 2000. With a large range of green and blue colors, la “Place Jean-le-Vacher,” with its the iron gate and the presbytery lion statues, and the Le Vacher house, with its large glass window, are the same as when first painted.

Three additional watercolor works were recently discovered and portray the village of Ecouen. The “La rue de la fontaine” (The Fountain Street) shows the bottom of the street of that name. The “Le lavoir de la rue de la Grande-Fontaine” (the Grande-Fontaine Street Laundry Place) is a lateral view, from the vantage point at the border of the laundry place close to the low wall separating the small basin from the large one.

Some of Blemond’s works are exhibited in the Council room of the Ecouen City Hall. Did Blemond exhibit at any Paris Salon? Did Blemond reside in the village of Ecouen? It’s not possible to answer these questions and he is not recorded in any census. However, through his fine work and attention to detail, we can appreciate his talent and village life during his time. 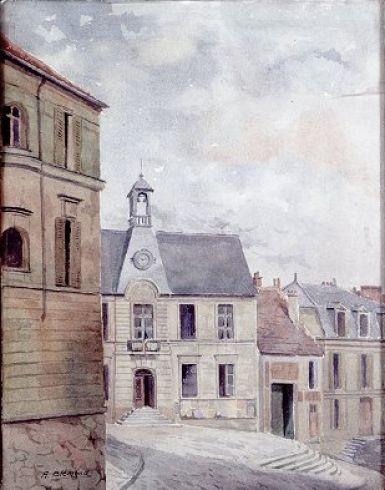